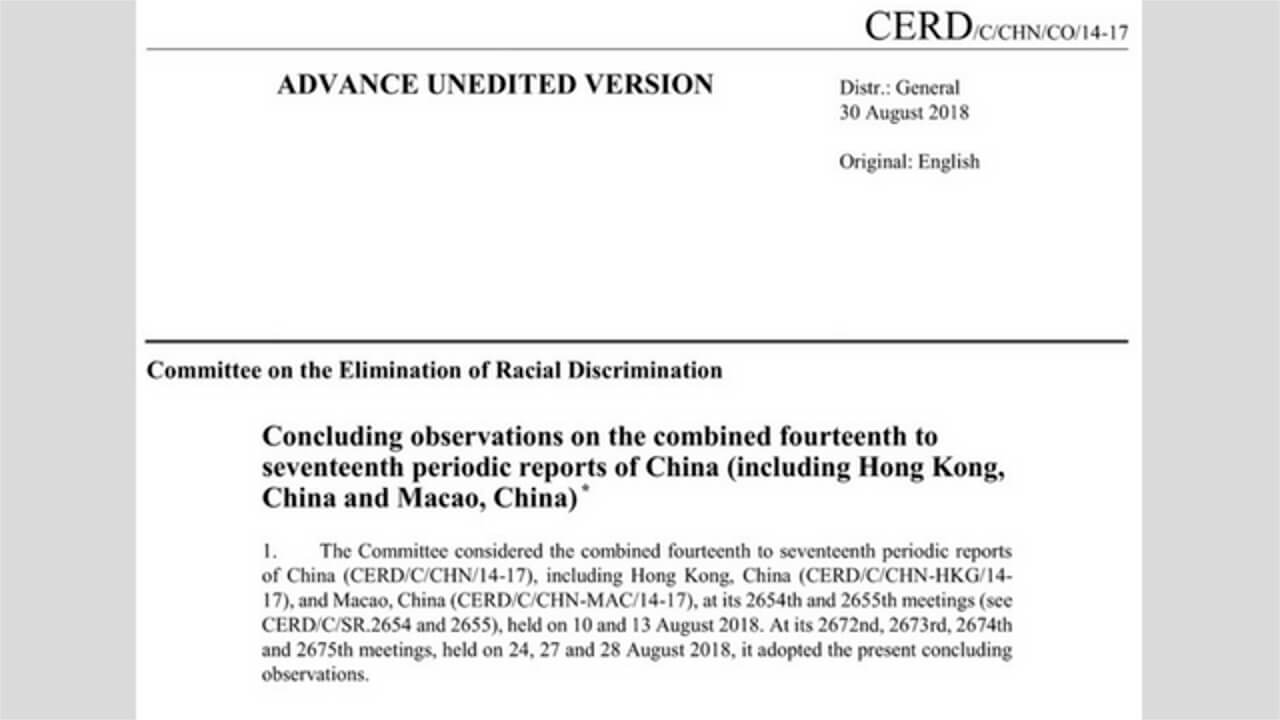 The U.N. Committee on the Elimination of RaciaL Discrimination denounces mass detention of Uyghur Muslims in its report on China

On August 30, 2018, the Committee on the Elimination of Racial Discrimination of the United Nations released its periodical report on China. Although discriminations against Tibetan, ethnic Mongols, and other minorities were also mentioned, a significant portion of the report was consecrated to the Uyghurs.

The UN Committee acknowledged “numerous reports of detention of large numbers of ethnic Uyghurs and other Muslim minorities held incommunicado and often for long periods, without being charged or tried, under the pretext of countering terrorism and religious extremism”. The Committee expressed regret that “there is no official data on how many people are in long-term detention or who have been forced to spend varying periods in political ‘re-education camps’ for even non- threatening expressions of Muslim ethno-religious culture like daily greetings. Estimates about them range from tens of thousands to upwards of a million.” Chinese denials were dismissed as not believable.

The Committee also reported “mass surveillance disproportionately targeting ethnic Uyghurs, including through frequent baseless police stops and the scanning of mobile phones at police checkpoint stations”. In addition, all Xinjiang “residents are required to hand in their travel documents to police and apply for permission to leave the country, and that permission may not come for years.” Worse still, “many Uyghurs abroad who left China have allegedly been returned to the country against their will. There are fears about the current safety of those involuntarily returned to China.”

The Committee asked China to “disclose the current location and status of Uyghur students, refugees and asylum seekers who returned to China pursuant to a demand by the State party over the past five years,” and “provide the number of people involuntarily held in all extra-legal detention facilities” in Xinjiang “during the past five years, along with the duration of their detention; the grounds for detention; humanitarian conditions in the centres; the content of any training or political curriculum and activities; the rights detainees have to challenge the illegality of their detention or appeal the detention; and any measures taken to ensure that their families are promptly notified of their detention.” While admitting that it provides to Uyghurs re-education “services,” China has already indicated that it will not comply with these requests.