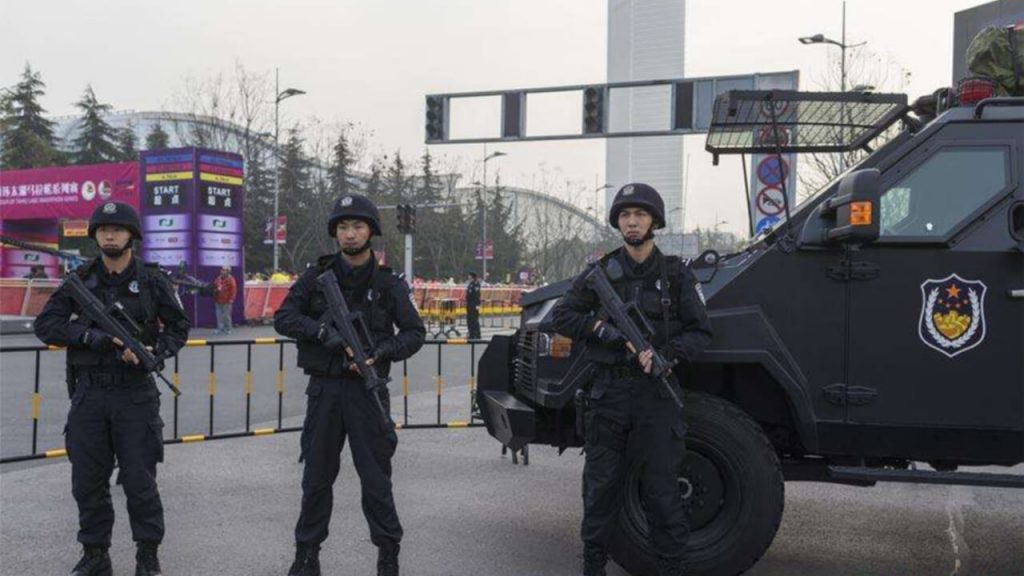 Beginning in April 2017, Uyghurs accused of harboring “strong religious views” and “politically incorrect” ideas have been jailed or detained in re-education camps throughout northwest China’s Xinjiang Uyghur Autonomous Region (XUAR), where members of the ethnic group have long complained of pervasive discrimination, religious repression, and cultural suppression under Chinese rule. Sources say detainees routinely face rough treatment at the hands of their overseers in the camps and endure poor diets and unhygienic conditions in the often overcrowded facilities. China’s ambassador in Washington, Cui Tiankai, told National Public Radio in an interview broadcast Oct. 4 that the facilities represented “efforts to help people to learn skills, techniques to build up their economic capability.” An officer at a police station in Kashgar (in Chinese, Kashi) prefecture’s Kona Sheher (Shufu) county recently told RFA’s Uyghur Service about the conditions at a camp where he worked as a guard for 10 months. In the first part of an interview, the officer—who spoke on condition of anonymity for fear of reprisal—detailed the layout of the camp, the daily routine of the detainees, and the punishments they were subjected to if they did not obey the rules.

RFA: Can you describe the re-education camp you worked at?

Officer: It was comprised of three buildings when I was there, but I heard it has been extended to seven. All the buildings are the same height at five floors … The offices are all on the ground floor and detainees are housed on the remaining four floors.

RFA: How many detainees live on each floor?

Officer: When I was there, on the second floor [of my building] there were 16 dorm rooms [for detainees], four classrooms, two meeting halls, one dorm room for the police, and one for cadres [teachers]. There were approximately 10-14 detainees in each dorm room … [There were] two police officers and 10 security officers [on each floor].

RFA: You said there are 10-14 detainees in each dorm room, so that means there were around 200 detainees on each floor. In total, there were approximately 800 detainees, and more than 50 police officers in each building?

Officer: Yes. When I was there, there were 234 police officers working at the re-education camp.

RFA: How many hours of lessons do [the detainees] have each day?

RFA: How long is the lunch break?

RFA: Do they have a break during their four-hour lesson?

RFA: Do the teachers change during the four-hour lesson?

Officer: Yes … every hour. In the morning [the detainees] study the official language (Mandarin), and civil law and regulations, while in the afternoon they discuss their own problems. “For such-and-such a reason, I am here receiving re-education.” Teachers then offer psychological correction.

RFA: So in the afternoon they confess what they have done?

RFA: When [the detainees] sit together, are they allowed to talk to one another?

Officer: No, they are not allowed to talk.

RFA: What about when they are in their dorm rooms?

Officer: They are under constant surveillance. We watch them via closed-circuit cameras, with two in each room.

RFA: So if they speak, what is the punishment they receive?

Officer: [Usually] we give them a warning first, but then order them to stand for between 15 minutes to half an hour … If two people speak with one another, we call them out to ask them separately what they said. Depending on what was said, we decide how to discipline them. If they were protesting against our rules, planning an escape, or considering suicide, we would report the incident to the higher authorities, who would take the necessary action. On camera we can’t hear what they say.

RFA: Are there any strict requirements regarding the positioning of detainees’ hands when in class or in the dorm rooms?

Officer: When they are in class, their hands must be placed on their desks. When in the dorm rooms, they must place their hands on their knees … or on their notebooks.

RFA: In the dorm rooms, do they have tables or desks to write on?

Officer: No. They have to place their notebooks on their knees to read or write.

RFA: What would happen if their hands are in their pockets or at their sides?

Officer: We give them a warning before ordering them to stand as punishment.

Reported by Shohret Hoshur and translated by RFA’s Uyghur Service.