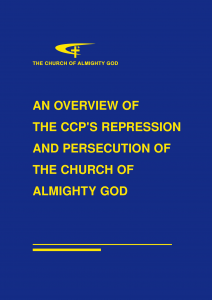 The Origin and Development of The Church of Almighty God

The Church of Almighty God is a Christian church founded in China in 1991. The Church came into being due to the appearance of Almighty God—the second coming of the Lord Jesus—and the truths He expressed in “The Word Appears in the Flesh”, fulfilling the prophecy of the Lord Jesus: “For as the lightning comes out of the east, and shines even to the west; so shall also the coming of the Son of man be.” (Matthew 24:27) Accordingly, the Church is referred to by various Christian denominations as “Eastern Lightning”. The name “Almighty God” fulfills the prophecy in the Book of Revelation: “I am Alpha and Omega, the beginning and the ending, said the Lord, which is, and which was, and which is to come, the Almighty.” (Revelation 1:8)

Christian doctrine originates from the Bible. The doctrine of The Church of Almighty God originates from the Old and New Testaments of the Bible, as well as “The Word Appears in the Flesh” expressed by Almighty God—the returned Lord Jesus of the last days. “The Word Appears in the Flesh” fulfills the prophecies of “the scroll opened by the lamb” (Revelation 5:1-5) and “the Spirit said to the churches” (Revelation 2:7, 11; 3:6).

The missionary purpose of The Church of Almighty God is making people see that Almighty God is the second coming of Lord Jesus in the last days, who has already begun the work of “judgment must begin at the house of God” (1 peter 4:17) as prophesied in the Bible, so that all Christians and Catholics who truly believe in God and love the truth can accept His words and work, and thus be taken up into heaven. This is also why The Church of Almighty God has been slandered and condemned by many religious leaders.

The Church of Almighty God officially commenced preaching the gospel to Christians of all denominations and sects in Mainland China in 1995. As of 2005, more than a million people from Christian house churches and underground Catholic churches have converted to Almighty God, including those from the Shouters sect (also known as the Local Church in the West), Seventh-day Adventist Church, the Born-Again Movement, the Sola Fide Movement, and the Great Praise sect, as well as some former non-believers. As of now, there are around 3.5 million Christians of The Church of Almighty God in Mainland China.

Since the CAG was founded in 1991, members of the Church have been arrested, imprisoned and tortured by CCP police for attending church meetings and preaching the gospel. The CCP has offered a reward for information leading to the capture of the CAG’s top-ranking executive leader, who is wanted for organizing church activities such as arranging meetings.

In 1995, the CCP released a document condemning Christian house churches such as the CAG, the Shouters, and the All Ranges Church as “Xie Jiao,” and then cruelly suppressed the CAG under the guise of “cracking down on Xie Jiao.”

In 1998, an internal document of the CCP Ministry of Public Security requested all areas to deploy secret forces to investigate the CAG.

In 1999, the CCP Ministry of Public Security issued another document, claiming that the CAG had continued to expand and demanding further strengthening of the investigation into the CAG.

In April 2000, the CCP Ministry of Public Security set out a list of “Xie Jiao” in notice No. 39, demanding the suppression and banning of 14 religious organizations including the CAG. Christian house churches comprised more than half of the list.

In August 2000, the CCP Ministry of Public Security held a secret meeting, during which it claimed that the CAG was growing at an alarming rate and set up “The Church of Almighty God Project.” Codenamed “Project 807,” the project provided a unified command within national borders to carry out special investigations and suppression against the CAG. Jia Chunwang, the Minister of Public Security at the time, said during the work meeting to “take them out without making a sound.” This document was released in 2002 by Freedom House, which also simultaneously released an additional 5 documents related to the suppression of the CAG.

Since 2000, the CCP has conducted many secret meetings and launched special projects and operations in various provinces, cities and districts across the country to capture Christians of The Church of Almighty God. For example: The Ministry of Public Security’s “Thunder No. 3” project in 2005; Guangdong’s “Thunder No. 3 0808” operation between 2008 and 2009; Shanxi’s “7.17” operation in 2009; Henan’s “Thunder No. 3 BDS301” project in 2011 (“Operation Windstorm”), which captured 14 leaders and many brothers and sisters of the CAG. Meeting materials reveal that the operation was preceded by 8 months of secret surveillance, analyses of more than 500 phone records, and more than 100 instances of tracking church members.

In late 2012, the CCP accused Christians of the CAG of propagating the end of the world, and publicly arrested a large number of church members. Based on incomplete statistics, in the two short years between 2011 and 2013, at least 380,380 Christians of the CAG were arrested, detained, or sentenced to prison terms merely for participating in religious activities, 35,330 church members had their homes raided, at least RMB 1 billion was forcibly confiscated, 43,640 church members were subjected to various kinds of torture via kangaroo courts, and 17 people were persecuted to death.

In early 2014, the CCP further increased its suppression and persecution of the CAG. Internal CCP documents reveal that, as of May 2014, authorities in Guangdong province had arrested 990 Christians of the CAG and confiscated at least RMB 2.5 million in church assets within the span of 1 year and 4 months.

On June 16, 2014, using the Zhaoyuan McDonald’s murder as the reason, the CCP launched the “Hundred Days Battle” operation to openly suppress the CAG, offering rewards of RMB 10 million for information leading to the arrest of Christians of the CAG. Concrete arrest numbers could not be tabulated due to the severity of the persecution. Despite some media accounts, the gap between reported arrests and the actual number of people arrested is significant. At least 500,000 Christians are estimated to have been forced to flee their homes, with a portion escaping overseas.

In 2017, the CCP increased its persecution of the CAG. At the start of the year, the CCP commenced a “Door-knocking Operation,” conducting a dragnet search for Christians of the CAG, establishing a database, and making group arrests. According to the church statistics, at least 583 Christians were arrested in Zhejiang province from July 2 to July 10, 2017. As of early October of the same year, the number of people arrested had increased to 638. The majority of those arrested remain in detention. Precise details cannot be obtained as family visitations are prohibited.