After the coronavirus lockdown restrictions were lifted in April, authorities took to destroying temples on various pretexts.

The Qinglong Manchu Autonomous County government in Qinhuangdao city convened a meeting in late April, demanding to “spare no effort in every aspect of religious work to implement the central government’s policy” and “demolish and rectify” folk religion temples. According to a temple director in the county, over 20 local folk religion temples had been shut down or demolished by the end of June. 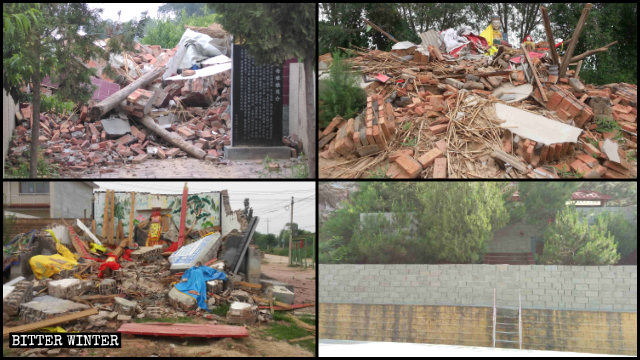 In Xingtai city’s Ren county, 57 temples were demolished, and three were repurposed in May and June.

On July 7, the Nanhai Temple (translated as South Seas Temple) in Xingtai’s Guangzong county was destroyed with religious statues left inside it.

An elderly county resident told Bitter Winter that the temple, spanning the history of nearly one thousand years, had a special place in people’s hearts. On the demolition day, over one hundred residents got on their knees to plead local officials not to demolish the temple, but to no avail. The officials threatened to arrest those challenging the demolition and cancel their pensions.

People built a small temple on the old one’s foundation, but the government soon destroyed it and leveled the foundation.

In Handan city’s Ci county, many folk religion temples were repurposed for storehouses and other use in May. Among them, the Bailong Temple, built in the Ming dynasty (1368–1662), was converted into an activity center. The Jade Emperor Temple in the county was closed in June.

“No one can stop the government from demolishing residential houses, let alone temples,” a temple director from Handan city said helplessly.

“Xi Jinping just wants all people to submit to his leadership blindly,” a Handan resident said.

The Fuxi Terrace, the Human Ancestor Temple, and Nüwa Temple in Gongyi city, administered by the prefecture-level city of Zhengzhou, were demolished in May. Another folk religion temple has been converted into a Chinese Civil War memorial hall.

The Jade Emperor Temple in Puyang city’s Shiguan village was demolished in July. Two other folk religion temples in the city were bulldozed in the name of “beautifying the environment” and because they were “too close to the expressway.”

The Cangjie Mausoleum, built in the Eastern Han dynasty (25–220) in what is now Puyang’s Nanle county, was demolished earlier in July. The 2,700-square-meter temple was destroyed to give way “for the construction of a commercial street.”

The Baoen Temple in the prefecture-level city of Kaifeng was demolished in the afternoon of July 29. About 200 Public Security Bureau and Urban Management Bureau officials and police officers took part, preventing anyone from approaching the site.

“Nobody dares to contradict the government; anyone opposing them will be arrested,” a Kaifeng city resident said helplessly.

The Tailing Temple in Zhengzhou city was leveled to the ground at 4 a.m. on April 10, without warning its director.

“Had I received any notice, I would have moved my belongings out of the temple,” the distressed director explained. When he asked a local official on site why the temple was destroyed at night, without informing him, he replied arrogantly, pointing at a small red flag pinned to his jacket, “I represent President Xi Jinping.”

Many folk religion temples in the prefecture-level city of Anyang were converted into Civilization Practice Stations for a New Era and elderly activity centers.

The Seven-Star Temple, built in the Ming dynasty (1368–1662), in Wenling city, administered by the prefecture-level city of Taizhou, was demolished because local officials declared it “unlicensed.”

According to an eyewitness, on September 8 and 9, over 100 personnel from the local Religious Affairs Bureau and police officers participated in the demolition. During the two days, they prohibited residents from approaching the temple, seizing cellphones from onlookers who tried to take photos.

“People worshiped in the Seven-Star Temple for generations. Statues of deities are now kept outdoors in the rain. The government is evil and malicious,” an elderly resident commented.

Since July, several folk religion temples in Huochakou village under the jurisdiction of the county-level city of Yuhuan in Taizhou were demolished because “there are too many temples.”

On June 24, government officials from Fujian’s capital Fuzhou dispatched about 300 workers to demolish the Deity Temple.

“They spent four days demolishing the temple,” a local source revealed. “The temple director’s mother asked to move statues of deities from the temple, but a dozen guards pressed her to the ground. The director demanded to see a demolition order but was also pushed to the ground. Both of them fainted and were taken to the hospital. The director’s 10,000 RMB (about $ 1,400) in cash and many belongings were buried in ruins because he didn’t have time to take them out.”

“The Communist Party is worse than bandits, and the situation now is worse than during the Cultural Revolution,” a Fuzhou resident commented.

The same month, over 100 personnel demolished Fuzhou’s Temple of Wind and Fire in the Ninth Heaven.