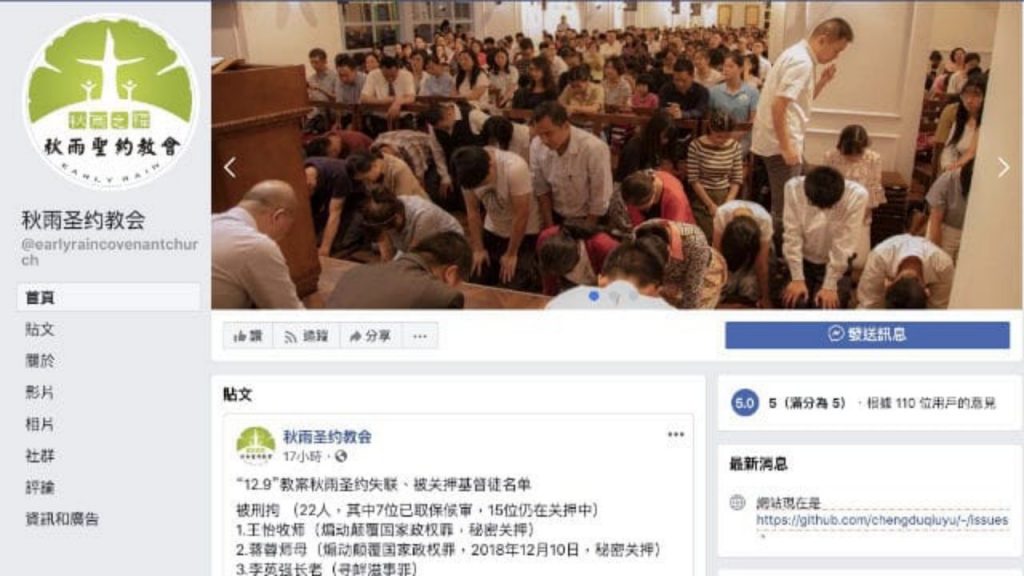 Repeated arrests of believers from Early Rain Covenant Church continue. The details of the beating of one faithful woman illustrate the extent of the injustice.

As Bitter Winter reported, on December 9, the Early Rain Covenant Church in Chengdu, the capital of southwestern China’s Sichuan province, was forcibly shut down, charging its pastor, Wang Yi, with “inciting subversion of state power.” Several believers remain in custody to date. One woman from the church has been arrested six times. The details of her beating by police officers can now be told.

According to China Aid, on the morning of Sunday, January 13, 2019, about ten members of the Early Rain Covenant Church were arrested when they were gathering at the home of a couple, Mr. Chen Shaowen and Mrs. Li Chengju. Among those taken away by the police were 11 adults and three children (the children ranged in age from 2 to 7). Four of those detained received administrative detention of 15 days.

But Li Chengju was not at the gathering, because she had already been arrested a week previously. She was serving administrative detention of 15 days, so her husband Chen Shaowen was allowed to go home to take care of their children.

Ms. Li has already been arrested six times in the last year, since the persecution of Early Rain Covenant Church began in earnest. In the mass arrest of more than 100 church members on December 9, Ms. Li was beaten viciously by the police. After being released, she gave other Christians at the church a detailed account of the police brutality she endured.

Ms. Li described the beating as follows: “During that gathering [on December 9], the police took church deacon Ge Yingfeng into custody. When I used my cellphone to take photos of them, the police tried to grab my cellphone away from me, but I didn’t give it to them. I said, ‘What you are doing is illegal. You have broken in without a search warrant.’ Upon hearing this, the police were infuriated. Three male officers knocked me to the ground. Some of them kicked me, while others struck me on the temple with their fists. They kept asking me, ‘Do you give up?’ One police officer forcibly pried my hands apart and grabbed my cellphone away from me.”

During that incident, Christian Wang Qiang (a pseudonym) was pressed against a wall and beaten by several police officers for refusing to provide personal information. Ms. Li tried to help rescue Wang Qiang, but was struck in the face by National Security Brigade police, knocking her to the ground. After she stood up, three police officers rushed forward and held her against the ground. They hurled insults at her while beating her. During this time, some of her hair was ripped out.

“The police said that I had been ‘brainwashed.’ They struck me while hurling profanities, and told me to lie prone and not move,” Li Chengju said. “I instinctively wanted to stand up, but I was again savagely beaten by several police officers, causing my head to swell.”

This episode of police brutality was witnessed by Ms. Li’s eight-year-old daughter, who could only stand to the side and cry.

When Li Chengju refused to deny her faith, an officer said arrogantly, “Come and worship me! Kneel down for me. Where is Jesus? Are you going to get Him to punish me? I am the law! If you go to Early Rain [Covenant Church] again, we’ll kill you! Next time we arrest you, you will be beaten even more cruelly than this time. You will lose even more of your hair!”

At present, Pastor Wang Yi from the Early Rain Covenant Church has been accused of the crime of “inciting subversion of state power.” Many others have been indicted on charges such as “picking quarrels and provoking trouble” and “illegal business operations,” and remain in custody. The Chinese Communist Party (CCP) authorities have “elevated” ordinary religious groups into organizations that endanger the stability of state power, and the intensity of the government’s crackdown continues to rise. As Uyghur Muslims and religious groups designated by the CCP authorities as “xie jiao” have learned, once an organization has been branded as “endangering the stability of the regime,” they will face violence and repression.

For most Early Rain Church Christians, persecution from the authorities is far from over.

According to a believer from the Early Rain Covenant Church who was forcibly returned to his hometown by the police, all believers of this church from out of town have been sent back to their hometowns to be detained and punished, and are prohibited from returning to Chengdu. For local Chengdu believers, anyone who lives at the church must move out, and are forced to sign a statement promising to sever ties with the Early Rain Covenant Church, to stop believing in God, and to stop spreading the gospel. Those who refuse to sign such a pledge will be dismissed by their employer, arrested, and detained. Local believers in Chengdu are persecuted seriously. At some Chengdu believers’ homes, for example, four or five police officers conduct surveillance from morning until night. Many Chengdu believers have been arrested and criminally detained. Although some of them are released after about two weeks, they are repeatedly arrested, released, re-arrested, re-released—and so on. This situation continues to the present day.

According to CCP insiders, Chengdu’s Early Rain Covenant Church has always been a top target of the government’s crackdown. Now that the church has been closed, it will be easier to persecute other churches.

We already see this happen, as more and more churches find themselves targeted by the Party. Pastor Francis Liu from the San Francisco-based Chinese Christian Fellowship of Righteousness said, “It has been reported through many channels that the police tell the people whom they have arrested that their churches are illegal churches, that their religious beliefs are wrong, and that their organization is a xie jiao. Of course, the authorities’ behavior is extremely ‘evil.’ As long as it is unfavorable toward them (the authorities), or they believe that it is organized and poses a threat to their rule, then they will categorically brand it as a xie jiao.”

Despite the threats and abuse, most believers’ faith remains strong. After repeated arrests, and facing persecution that could intensify in the future, Li Chengju told Bitter Winter, “I will still continue to attend gatherings. I’m not ashamed of it. Rather, I despise the CCP’s violence. I think it is a joyous thing that believers can suffer together with the Lord.”