Having declared that over 90 % of detained Uyghurs in Xinjiang had been released, the CCP continues subjecting them to forced labor in the region’s factories.

Shorat Zakir, the Chairman of the Xinjiang Uyghur Autonomous Region, declared in July last year that more than 90 percent of the Uyghurs detained in transformation through education camps had been released and “found suitable work to their liking.” But more and more facts prove that these people have not been freed. They are subjected to forced labor instead, and the state strictly monitors their every move. It’s a new form of detention, which brings financial benefits to the government.

A source from Xinjiang’s Kashgar city told Bitter Winter that the Chengnan Education and Training Center, an internment camp in Shule county, has been sending young Uyghur detainees to work in nearby textile, electronics, soft drink, and other factories since last year. About 800 people remain detained in the camp because “their religious ideology has not been transformed.”

Some Chengnan center detainees are taken by busses for forced labor in various plants each morning and are taken back in the evening. Others have been permanently transferred to live in their places of work. A young Uyghur woman from the camp now lives and works in a textile factory in the county’s Baren township. She is allowed to stay at home for a day or a night sometimes, but she still has to spend most of her time in the factory. “I don’t want to leave home,” her family remembers her saying before she had to go back after a recent visit. Her short stays with the family are not relaxed because village officials frequently visit to check on her.

When her relatives and friends asked about her work in the factory, the woman just shook her head and started crying, saying that all detainees were prohibited from talking about their work, not even with their family.

Another source revealed to Bitter Winter that some elderly Uyghurs working and living in the same textile factory are assigned to so-called “labor service dispatch teams”: They are sent to nearby towns or townships to pick up cotton and other crops. These workers are paid 13% below the average market salary. On top of that, 15 RMB (about $ 2.1) is deducted for transportation and an additional sum for food, so not much is left. Some of the Uyghurs own cotton fields themselves but are not allowed to work on them.

A government employee from the region’s capital Urumqi told Bitter Winter that the industry park in the Midong district also employs Uyghur laborers from camps. Some are also sent to work as naan bread makers in a cultural-industrial park in Urumqi. They work behind display windows for visitors to see them. The park claims to be reducing poverty, having transferred 400 Uyghurs as “surplus laborers” from southern Xinjiang at the start of last year. 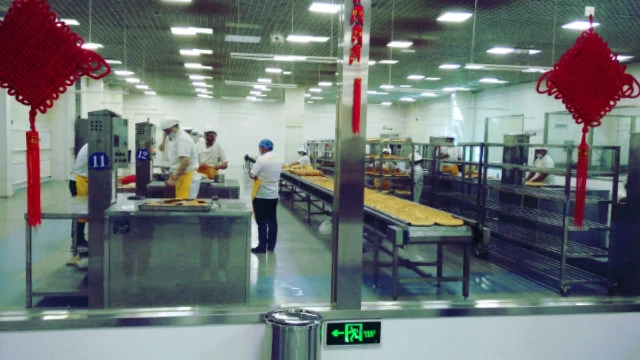 Another source from Urumqi said that the government forces companies to accept laborers from internment camps. “Enterprises in the industry park in Midong did not want to take these workers but had no choice after the authorities pressured them,” the man explained. “These Muslims are freed only nominally. It’s another form of detention. They are still supervised closely. The government is telling lies! By making Uyghurs work, it reduces the state’s financial burdens while continuing to surveil and control them. They also do this to evade international condemnations and sanctions.” He believes that such social stability measures are excessive, but “the government just does not trust Uyghurs.”

A businessman working with government contracts from Kashgar told Bitter Winter that he had been employing Uyghurs from internment camps since 2019. The groups are sometimes as large as more than 100 people. Even when enterprises don’t need so many workers, they are obliged to take as many as the government assigns. The man said that Uyghurs work under the supervision of specially designated personnel. He once witnessed how they violently beat a man for attempting to escape.