An analog of the system that judges peoples’ behavior and reliability was introduced in a Hong Kong school, jeopardizing the education of students with low credit.

China’s infamous social credit system threatens to gradually deprive its citizens of what’s left of their rights and freedoms. In 2014, the State Council promulgated a Planning Outline for the Construction of a Social Credit System (2014 to 2020), with pilot trials launched in various regions of China. Expected to be fully implemented next year, the system will track and score 1.4 billion citizens to determine their social standing. This score will decide whether or not one can travel, be promoted at work, buy a car or a house; and even what kind of school one’s children can attend. Presented by the government as a tool to create a “culture of integrity” and increase “the level of credibility of the entire society,” the system is, in fact, yet another measure for the regime to monitor and control everyone, at all times. And now the CCP is attempting to implement it in Hong Kong.

On September 3, a netizen posted a series of messages on a popular Hong Kong online forum that Saint Antonius Girls’ College in Hong Kong’s Yau Tong area is adopting a new students’ conduct scoring system in the new academic year. Every student starts with 100 points as a base score. Those who “win glory” for the school will receive additional points, while students who “behave recklessly” will have points deducted. At the end of each semester, students with a score of fewer than 50 points may lose the opportunity to further their education. 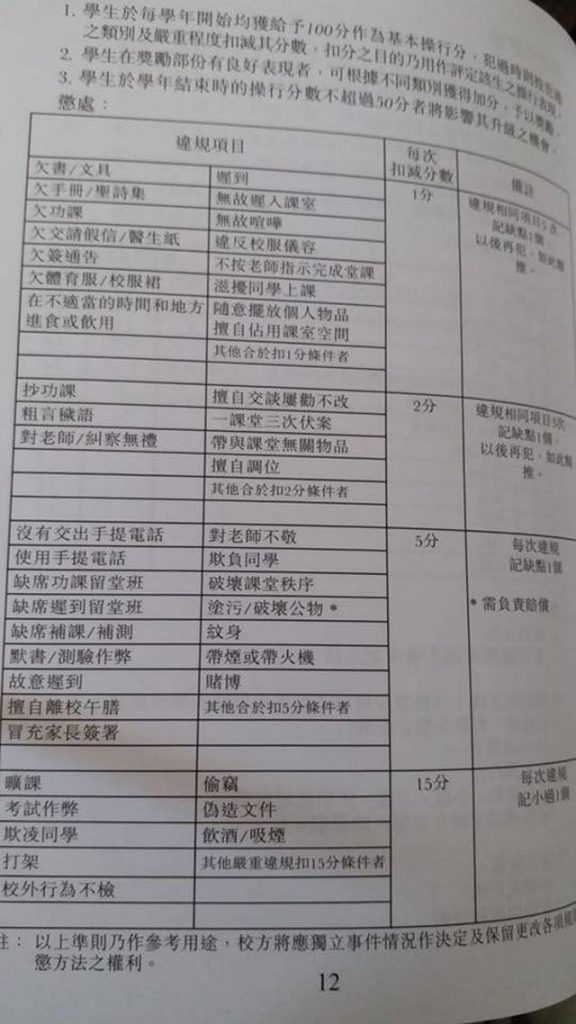 The schools scoring method is very similar to China’s social credit system. Violations for which points are deducted include but are not limited to disrespecting teachers, not completing homework, refusing to hand over cellphones when ordered, skipping classes, putting personal items anywhere at will, and hunching over a desk three times during one class. From one to 15 points will be deducted from a violator’s score per instance.

Although the school later stated on its website that the scoring system had been canceled, many are still concerned that Hong Kong’s education sector is influenced and controlled by the CCP. A netizen pointed out that some of the scoring criteria developed by the school authorities are vague. For example, it is unclear whether holding a view different from the school’s political stance is considered detrimental to the school’s reputation. The scoring system also lists some other flexible options that “accord with the conditions for the deduction or earning of points.” For example, students who “serve the teacher” can gain 3 points.

In response to the school’s regulations, a netizen said, “This is purely an abuse of public power.” Some netizens posted images, likening the school to transformation through education camps in Xinjiang.

A tool to control protesters in Hong Kong

The school’s students are worried that the scoring system is not transparent enough, and that teachers will not be fair in deducting points. They fear that it will also become a tool for the school to control students’ words and behavior heavy-handedly on and off campus.

On September 2, an audio recording from Hong Kong’s Confucian Tai Shing Ho Kwok Pui Chun College was exposed on Facebook, in which a female, suspected to be the principal of the school, demanded students not to take part in a citywide strike of university and secondary students who boycotted classes and joined anti-government rallies. “If you want freedom, then don’t be a student,” the woman is heard saying. She also said that the school would submit the names of students on strike to the Education Bureau. According to a report by Hong Kong media outlet Stand News, on September 2, students from nearly 200 schools held spontaneous class boycotts, and some of them were threatened to get a “major demerit.”

A Hong Kong resident told Bitter Winter that if the scoring system is implemented in schools, he is very concerned for the students who take part in strikes and protests. “Will students be deemed as ‘behaving recklessly off-campus’ and ‘disrespecting their teachers’?” the man asked worriedly, fearing that students will be punished for political disobedience.

At the symposium for ideological and political theory teachers held on March 18 in Beijing, President Xi Jinping repeatedly stressed the necessity of “cultivating generations of talents that will support the CCP leadership and the Chinese socialist system.” “This must start with schools and children,” he said. In recent years, the CCP has frequently interfered in Hong Kong’s education sector, triggering backlashes from Hong Kong society.

The anti-extradition bill protests are the result of residents realizing that the CCP is using various means to control and infiltrate Hong Kong. That is why many oppose the implementation of the social credit system in mainland China, moreover, it being introduced in Hong Kong.

On July 5, the Three-year Action Plan (2018 to 2020) for the Development of the Guangdong-Hong Kong-Macau Greater Bay Area was released, with the government of the southeastern province of Guangdong taking the lead in promoting the plan. The action plan states that the social credit system currently in use in mainland China will be introduced to Hong Kong and Macau within three years. The news provoked a heated debate in Hong Kong. On July 9, the Hong Kong government clarified that the social credit score system would not be implemented in Hong Kong for the time being. But on August 24, demonstrators found numerous components produced in China in a lamppost that they dismantled. One of these components was a Bluetooth transmitter called “BLE Locator,” which is suspected of transmitting people’s data to “Project Skynet” in mainland China, the incident once again causing public anxiety.

Some commentators fear that if the social credit system is implemented in Hong Kong, it will result in a disaster that is equal to, or even worse than, the harm caused by the Fugitive Offenders Ordinance – the bill that has caused anti-extradition protests – to everyone living in Hong Kong.

Others believe that the protests have dissuaded the CCP from indiscriminately promoting the social credit system in Hong Kong because as soon as it attempts to do so forcibly, it not only would face a full-scale backlash from the public but would violate the Sino-British Joint Declaration on the Question of Hong Kong. Signed on December 19, 1984, the legally binding document foresees that: “Rights and freedoms, including those of the person, of speech, of the press, of assembly, of association, of travel, of movement, of correspondence, of strike, of choice of occupation, of academic research and of religious belief will be ensured by law in the Hong Kong Special Administrative Region.”

A Hong Kong netizen who requested anonymity told Bitter Winter that the Saint Antonius Girls’ College incident makes him worry that the CCP is copying the methods that it uses to control people in mainland China and infusing them into every sector of Hong Kong society.